Home > About Us > Virginia Iglesias

Mission Statement: Her passion for flamenco is palpable…in performance as well as in her roles as master teacher and company director. A powerful and dynamic performer, Ms. Iglesias is dedicated to sharing her passion with audiences, community and students. Her commitment to preserving, promoting and teaching traditional flamenco art is paralleled with creating and developing new and original ideas in her own innovative style, while maintaining consistently high artistic standards.

Biography: An inspiring performer, master teacher and creative choreographer, Virginia Iglesias’s life-long love affair with dance began at the age of 6 with ballet and tap. A dancer all her life, Ms. Iglesias followed in the steps of her grandmother who danced Spanish classical and sang in local Zarzuela productions.

With an inherited passion for the music and dance of Spain, she rediscovered her Spanish roots 30 years ago, and has since been dedicated to the art of flamenco.

Ms. Iglesias received her training at Madrid’s renowned flamenco academy, “Amor De Dios” and began her professional dance career in Madrid, performing in Spanish dance companies and touring internationally. Living in Spain, immersed in the world of flamenco, she has trained with many of the great Spanish masters including Ciro, La Tati, Manolete, Eva “La Yerbabuena,” Juana Amaya, Belen Maya, El Guito, Antonio Canales, Javier LaTorre, Rafaela Carrasco, Isabel Bayón, Mercedes Ruiz, Angel Muñoz, Manuel Betanzos, Domingo Ortega and many others. Returning to Spain every year for extended periods of time, she stays current with the evolving styles of flamenco and brings new ideas to her performances and classes.

Since returning to the United States in 1991, Ms. Iglesias has delighted audiences with her dynamic and passionate performances. She has toured with Soledad Barrio’s Madrid based company, Noche Flamenca and the Hollywood Bowl Orchestra at the Hollywood Bowl in Los Angeles, and was a featured guest artist in Flamenco Arts Festival IV, Santa Barbara, featuring the legendary Cristina Hoyos. She has appeared extensively as a soloist and guest artist with companies such as La Tania’s Flamenco Music and Dance, Arte y Compas, Theater Flamenco, Flamenco Society of San Jose, Arte Flamenco, and Rosa Montoya’s Bailes Flamencos. She has made several appearances in the San Francisco Ethnic Dance Festival both as a soloist and with her second company Virginia Iglesias and Alma Flamenca receiving critical acclaim. She has danced on television, film and radio as well as for the Mayor of San Francisco. 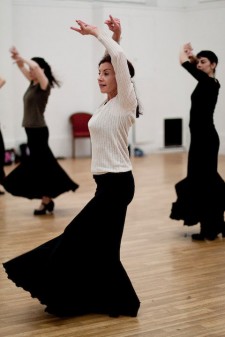 Directing and choreographing for her own performing company since 1991, Virginia Iglesias Flamenco Dance Company continues to inspire audiences with artistic excellence and an exceptional commitment to both traditional and modern influences in flamenco music and dance. Collaborating with world class musicians under the direction of composer and musical director Jorge Liceaga, this company demonstrates imagination, musically fusing flamenco with diverse cultures including Indian, Cuban and Middle Eastern music.

Ms. Iglesias is an invited Master Teacher for dance academies and schools, including yearly guest teaching for Alonzo King’s Lines Ballet School Pre-Professional Summer Program. She performs as a featured soloist throughout the Bay Area.